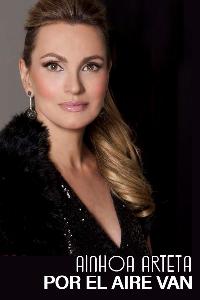 “The songs are creatures, delicious creatures that must be cared for so that their rhythm is not altered at all. Each song is a marvel of balances that can be easily broken.It is like an ounce that stays on the tip of the needle "

Our most international and therefore the most traveling lyrical singer, Ainhoa ​​Arteta, presents us with a delicious program, elaborated specifically for the public of Altea made up of Spanish, Portuguese and Latin American authors, united by a fruitful, traveling life and with proven love for the traditional and historical.

Ainhoa ​​Arteta is one of the most recognized sopranos in the world. Able to find inspiration even in small details. She feels very connected to butterflies, because of the good luck they convey to her. The family is her greatest support, especially her children, Sarah and Iker, and her partner, Matías.

He has sung in the best theaters in the world, however, his Spanish DNA has never left him. This is reflected in his voice, charged with emotion and intensity. Ainhoa ​​has not only achieved technical excellence, but has achieved something even more complicated: touching the soul of the viewer in each song.

Debuting with the character of Mimí in Puccini's La Bohème  is not easy. Even less if it is on the stage of the Metropolitan Opera National Council Auditions in New York. However, Ainhoa ​​succeeded, and with note. This debut, together with the award from the Concours International de Voix d'Opera in Paris, was the beginning of a brilliant career.

The list of stages in which he has performed is dizzying: from the Metropolitan Opera to Carnegie Hall, Covent Garden, Bayerische Staatsoper and La Scala in Milan, among others. This has allowed him to put himself in the shoes of main characters in operas such as La Traviata, La Bohème, Romeo et Juliette and Manon Lescaut.

His greatest successes include his role in Cyrano de Bergerac with Plácido Domingo at San Francisco Opera and at the Teatro Real; La Bohème at the Metropolitan and La Scala in Milan, Otello in La Coruña, Turandot, Carmen and La Bohème at the Lyceum, Dialogues des Carmelites, Eugene Oneguin and Simon Boccanegra at ABAO, the premiere in Paris of the opera “Le dernier jour d 'un condamné ”, Don Carlo at the Oviedo Opera and Don Giovanni at the Teatro Real, among others.

However, Ainhoa ​​does not seek to be pigeonholed into operatic performances, that is why he also offers recitals and concerts with great masters such as Sir Neville Marriner, Christian Badea, and Pablo González, and pianists such as Marco Evangelisti, Rubén Fernández Aguirre and Malcolm Martineau.

But that's not all, his cosmopolitan mentality and his desire to innovate have made Ainhoa ​​one of the few sopranos in the world to be able to say that he has performed in the White House. In addition, she is the voice of the main theme of the film "Gun City" directed by Dani de la Torre and starring Michelle Jenner, Adriana Torrebejano, Luis Tosar and Jaime Lorente.