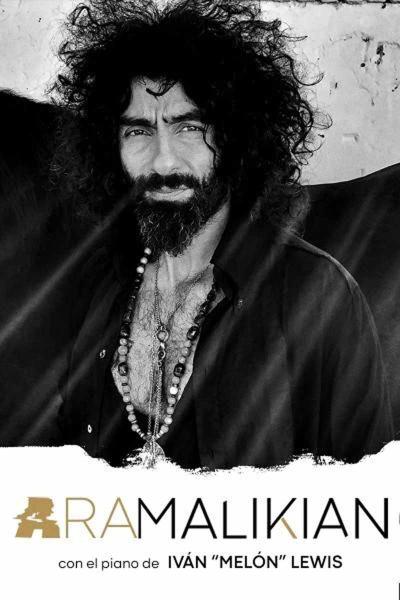 Ara Malikian is a Spanish violinist, of Lebanese origin and Armenian descent, born in 1968 and residing in Madrid, Spain. Ara Malikian has recorded more than 40 albums, has created her own orchestra and has participated in the production of countless shows. His last two tours, "15" and "The Incredible World Tour of Violin" have projected him internationally, visiting the most important capitals of the world concerts in the most prestigious auditoriums and theaters in the world: London, Paris, Rome, Moscow, Buenos Aires, Mexico City, Lima, Santiago de Chile, Beijing, Hong Kong, Istanbul, Belgrade, Bratislava, Madrid, Lisbon Berlin.

This tour presents his latest work "Royal Garage", a new album that will be released in early 2019 and that has great collaborations such as Andrés Calamaro, Enrique Bumbury or Serj Tankian. In the words of Ara Malikian: My relationship with garages began in 1976, when the war in Lebanon broke out, all over the world the most modern bands rehearsed in garages, took their sounds from there and created a style that would change the history of music and I, I did not want to be left without being part of that movement .- I was ten years old and my father told me to convince me. - "Come on son, let's go down to the garage, let's start a rock band like the Rollings." - My band didn't have as much vibes as theirs, I didn't rub shoulders with Keith Richards or Mick Jagger and we talked about rock and of avant-garde music, my uncle Nono was waiting for me with a dented trumpet, my neighbor with a bottle of anise and my grandmother with a mandolin.To this day I still don't see that what we were doing in the garage was Rock and Roll but I see love for it and that is more than enough. predestined for them, fascinating things happen to me in the garages. This tour will visit emblematic places such as the Royal Albert Hall in London, Tompodrom in Berlin, the WiZink Center in Madrid or the L ́Olympia in Paris, and large spaces such as Luna Park in Argentina , the Woldkwagen Arena in Istanbul, the National Auditorium of Mexico, Sofia Sport Palace among others.

On this occasion, he performs with the violinist, Iván “Melon” Lewis, Cuban pianist, composer and producer based in Madrid since 1998, who has collaborated with artists such as Soledad Giménez, Joan Manuel Serrat, Joaquín Sabina, Ana Belén, Lolita, Victoria April, Ainhoa ​​Arteta, the producer Javier Limón, the Portuguese Mariza, José Luis Perales and the international Buika.