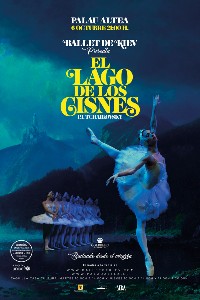 Donation to UNICEF to support its work in the UKRAINE emergency of €1.5 for each ticket sold. KIEV BALLET, DANCING FROM THE HEART

The work runs between love and magic, linking in his paintings the eternal struggle of good and evil. It stars Prince Siegfried, in love with Odette, a young girl turned into a swan by the spell of the evil Von Rothbart and Odile the black swan and the witch’s daughter.

It is Siegfried’s twenty-first birthday, and the young prince is celebrating the occasion in his palace garden. Young people from the surrounding states have come to pay tribute. When everyone begins to have fun at the party, the good mood is disturbed by the entrance of the Queen and her bridesmaids. She watches her friends with considerable disdain. Sigfrido is upset when her mother points out that she must soon choose a wife.

His indication, deep down, is an order, and Siegfried stubbornly rejects it. Tomorrow night, his birthday will be formally celebrated with a court dance, and there, among the most beautiful ladies of the region, he must choose his future wife. Siegfried sees that all discussion is impossible and seems to submit to his will. The jester tries to restore the spirit of the happy occasion. Night begins to fall. The Jester, his friend, knows that Siegfried must be distracted in what remains of the evening. Hear the sound of wings flapping overhead, look up and see in the sky beautiful wild swans in mid-flight. The Jester suggests that the prince form a hunting party and go in search of the swans. Siegfried agrees.

The hunting party begins. At a small distance from them, swans are gliding peacefully. Leading the group of swans there is a beautiful bird. The prince walks along the shore of the lake towards the swans; when he is about to follow them he sees something in the distance that makes him hesitate. It stands near the shore, then quickly withdraws through the clearing to hide. You have seen something so strange and extraordinary that you must observe it carefully in secret.

No sooner has he hidden than the most beautiful woman he has ever seen enters the clearing. He cannot believe his eyes, since the young woman seems to be both a swan and a woman. Her beautiful face is framed by swan feathers, which are attached to her hair. Her pure white dress is embellished with soft swan feathers, and on her head rests the crown of the Swan Queen. The young woman thinks that she is alone and terrified, her whole body trembles, her arms are pressed against her chest in an almost helpless attitude of self-protection; he recoils from the prince, moving frantically, to the point of desperately falling to the ground. The prince, already in love, begs her not to fly away and in response to her fear, the prince tells her that he will never shoot her, that he will protect her. She is Odette. The prince greets her and says that he will honor her, but asks her, why is she the Queen of the Swans? The lake, he explains, was made from his mother's tears. Her mother cried because an evil sorcerer, Von Rotbart, turned her daughter into the Swan Queen. And she will remain a swan, except between midnight and dawn, unless a man loves her, marries her, and is faithful to her.

Siegfried puts his hands on his heart and tells her that he loves her, that he will marry her and that he will never love another, and promises his fidelity. Now, outraged by the fate of his love, he wants to know where Von Rotbart is hiding. Just at this moment, the magician appears on the shore of the lake. His owl-like face is a hateful mask, he holds out his claws beckoning Odette to come back to him. Von Rotbart points menacingly at Siegfried. Odette moves between them, begging Von Rotbart for mercy. The prince tells her that she must go to the palace ball the next night. He has just come of age and must get married, and at the dance he must choose his bride. Odette replies that she cannot go to the ball until she is married -until Von Rotbart ceases to have power over her- otherwise the sorcerer would discover her and their love would be in danger.

When the lovers have made their point, Odette’s hosts, all the swans who, like herself, assume human form only in the hours between midnight and dawn, enter dancing from the shore of the lake.

The ball is about to begin. Ambassadors from foreign lands, dressed in their brilliant native costumes, have come to pay tribute to the prince on his birthday. It is announced the arrival of five beautiful girls, invited by the Queen as possible brides for her son. Siegfried thinks only of the clearing by the lake and his meeting with Odette. His mother asks him to dance with her guests.

She dances automatically and indifferently and plunges into a deep melancholy. A herald rushes to inform the Queen that a strange couple has arrived. He does not know who they are, but says that the woman possesses an extraordinary beauty. A tall and bearded gentleman enters with his daughter. When the knight presents himself and his daughter Odile, the Queen. Sigfrido-disturbed almost to lose control stares at the beautiful young woman. She’s dressed in sober black, but she’s the spitting image of her beloved Odette. This is Von Rotbart, who has transformed himself and his pretended daughter to deceive him and breaks Odette’s promise that he will never love another.

Odile has managed to make Siegfried fall in love and he thinks that she is none other than Odette. While the two young people dance, Odette allows herself to be seen in the distance and signals to Siegfried that if he continues in this attitude it could be fatal for her. Siegfried then approaches von Rotbart and asks for Odile's hand, and Odile immediately gives her consent. At that moment there is a crash of thunder. The ballroom darkens. Quick flashes of light show the frightened courtiers leaving the ballroom, the princess mother in a daze, and Van Rotbart and Odile standing before the prince in final self-revealing triumph. Siegfried cannot bear their hateful and cruel laughter, and turns to see the pathetic figure of Odette in the distance. Looking desperately for him, her body shaken by sobs. He falls to the ground tormented by his lack.

Act four (The Shore of the Lake)

The swan maidens have gathered at the edge of the lake. When she appears crying, they try to comfort her. They remind him that Siegfried is only a human, who may not have known the spell, and may not have suspected Von Rotbart’s plan. Siegfried rushes into the clearing and searches frantically for Odette among the swans. She takes him in her arms, asking him to forgive her and vowing her infinite love. Odette forgives him, but tells him that he is of no use, for his forgiveness corresponds to his death. When Von Rotbart appears, Siegfried challenges him, who, after the fight, is overcome by the strength of the prince’s love for Odette.