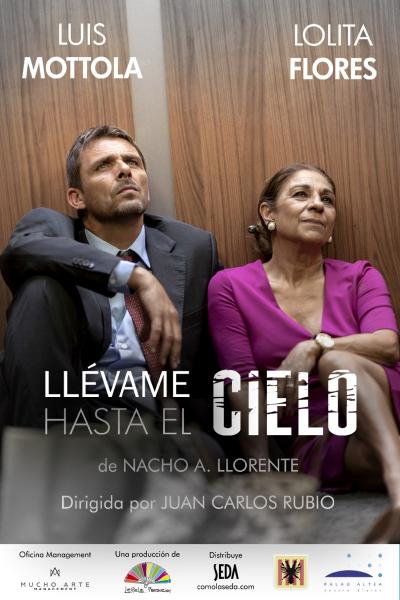 Marcelo has a plan. And nothing is going to prevent you from fulfilling it. But, in an elevator that stops hundreds of meters above the void, a stranger will take you, without leaving that suffocating space, to a world of serendipity, emotion and magic to make your life, despite the fact that time run, continue without stopping towards true freedom.

Take me to heaven is a two-in-a-box function, in which two characters who are in an elevator are fortuitously locked up and for a few hours discover the existence of a magical universe in which the impossible becomes reality by impacting in their lives forever.

A comedy that with romantic and tragic overtones describes the story of Ángela (Lolita Flores), an elegant and chaotic mature woman, and Marcelo (Luis Mottola), a young adult with a tired appearance and a defeated attitude.

Lolita Flores, with a successful career of more than four decades in film and television, since 2005 has focused her efforts on the theater with a great reception from critics and the public. This has led her to step on the best stages, on extensive national and international tours.

In 2019 he received from the hands of the Reyes de España the Gold Medal for Merit in Fine Arts, in recognition of his artistic work in the field of music, theater and film.

Luis Mottola, born in Buenos Aires and of Spanish origin, begins his career as a television actor in Argentina. Since then, he has only collected successes with multiple appearances in film, theater and television, mainly in Spain where he has resided since 2004.

Due to the restrictions related to Covid-19, discounts will be applied up to 10% of the available capacity.
share #palaualtea
share