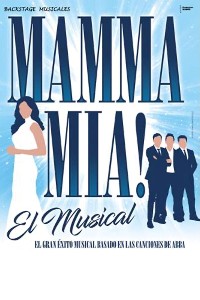 The musical group ABBA has undoubtedly been one of the most representative musical icons of the 70', the particular way of harmonizing the voices of its female members granted great success to many of the songs played by this quartet, and which continue to be known among the new generations. More recently, in the 90’s, his melodies have served as inspiration for the famous musical Mamma Mia! It premiered in London in 1999 and has reached more than 60 million viewers worldwide.

The musical contains songs as well known from the famous group as: «Dancing Queen», «Chiquitita», «Money, Money», «Super Trouper», «Waterlo», «Voulez Vous», and of course the theme that gives the name to the work: «Mamma Mia».

The music of the famous pop band serves as a setting to tell the story of a twenty-year-old girl (Sophie) who lives next to her mother in a hotel of her property located on a Greek island, the young woman who is about to marry has never met her father and her natural curiosity finds hope by chance in finding an old diary of her mother (Donna), where she can locate the address of three men who could be her father, therefore decides to invite them to the wedding without informing their mother with all the intention of discovering the identity of their parent.

The story is set in funny episodes full of music, dance and colorful costumes that frame the characters' crazy interaction in their eagerness to determine who of the three visitors is really Sophie’s father.