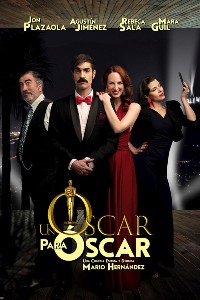 We are in the city of Los Angeles, on the day of the ceremony of the Academy Awards, the Oscars; specifically, in a modest motel on the outskirts of the city, in the room that will serve as a unique stage, and where through a glass window is seen, in the distance, the gigantic Hollywood sign. Here comes Oscar Manzano, a young director whose short film has been nominated for the awards, accompanied, not even he knows very well why, by the Minister of Culture Guillermo Barrientos, and the Minister of Finance Irene Navarro. Between continuous riffs of the two politicians, who cannot stand each other, and a few hours before the ceremony begins, the young Pauline, an "escort girl" is presented in Oscar’s roomhired secretly by Guillermo to pretend to be Oscar’s girlfriend during the gala and the red carpet...

This impossible group of four will live the craziest night of their lives in that secluded motel, meeting and unraveling in something that unites us all: our dreams and everything we lose on the way to achieving them.